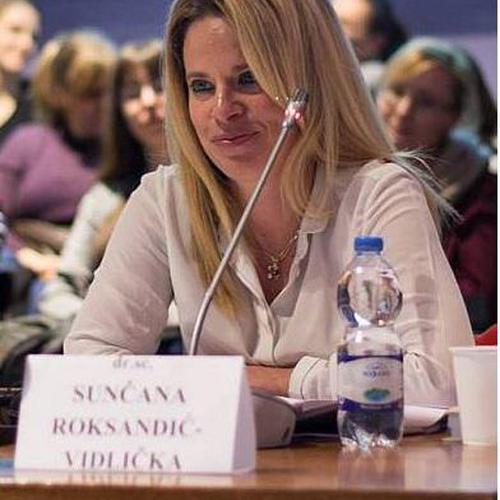 Associate Prof. Dr.Dr.h.c., Head of the Croatian Unit for the International Network of the UNESCO Chair in Bioethics and a member of UNODC Anti-Corruption Academic Initiative.

Political corruption and organised crime in the WB6

She received an honorary doctorate (doctor honoris causa) in 2019 at East European University, Tibilisi, Georgia for her work and activity related to "the responsibility of transnational corporations and other business enterprises for breaches of human rights."  She is a sholarship holder of the Foundation Marija i Mirjan Damaška for her postdoctotral research (2019/2020).

Born in Zagreb where she finished elementay school and attended Gymnasium (Gymasium for classical languages). She graduated in the USA. She obtained her Master of Science Degree in Company and Commercial Law at the Faculty of Law, University of Zagreb (2011) and graduated at the same Faculty of Law (2000), all in top 3%. After graduation, she worked seven years in legal practice, first as as he legal trainee in the law firm Bogdanovic, Dolicki & Partneri later as legal adviser to Croatian Medical Chamber. For her work in Croatian Medical Chamber she has received a special recognition - an award for the contribution to the development of the Croatian Medical Chamber (2005). She passed Croatian bar exam.

She is the Head of the Croatian Unit for the International Network of the UNESCO Chair in Bioethics and a member of UNODC Anti-Corruption Academic Initiative. She was a member of the Max Planck Partner Group for Balkan Criminology (2013-2019) and the external member of the Otto Hahn Group of the Max Planck Society: Architecture of the Security System (ArchiS). She was the head of Jean Monnet Project Advanced Seminar in EU Criminal Law and Policy (2016-2019) and (co)founder and (co)director of the course under same name that is held every year at the InterUniversity Center Dubrovnik: http://euclp-sem.eu/. She co-edited the book as a result of collected papers from the JM Advanced Seminar "Dealing with Terrorism." In addition, she is an invited lecturer at the Geoffrey Nice Foundation Course, since 2017.

Sunčana Roksandić acts as an expert in national, regional and international projects (e.g. UNODC, UNDP, Max Planck Institute for Foreign and International Criminal Law, Global Initiative Against Transnational Organized Crime) and as national expert in the implementation of EU directives ( e.g. Victims' Rights Directive and Forth Anti-Money Laundering Directive). She is serving as a regional expert on transitional justice issues, primarily corruption and economic crimes. She is a head of University of Zagreb Project: Research Network in Transitional Justice (since 2019).

She is a member of the Management Committee of COST Action: CA18228 - Global Atrocity Justice Constellations and serves as STSM Coordinator (2019-2024).

Of project's financed from the Croatian Science Foundation (HRZZ), she participated as a researcher in the project „Multidisciplinary Research Cluster on Crime in Transition –Trafficking in Human Beings, Corruption and Economic Crimes“ and is currently reseacher in the project „Projekt nedužnosti u Hrvatskoj“ (Innocence project; CroINOP), all headed by prof.dr.sc. D. Derenčinović. She serves as a head of the Project of the University of Zagreb: Research Network of transitional justice“ (2019/2020).

She is one of the model course drafters and developers of UNODC (E4J) in the area of peace, corruption and security (first drafter). In 2018 she received the acknowledgment Education for Justice (E4J) Champion, for teaching University Module on Integrity and Ethics. She was a member of Working Groups of Ministry of Justice drafting Law on Protection of People with Mental Disabilities (full member) and Criminal Code (external member) and president of the Working group of ministry of health on unifying provisions of informed consent. Currently she is a memeber of the Working Group of the ministry of justice on monitoring the implementation of the Law on Protection of People with Mental Disabilites and a Member of the National Risk Assessment Group on the Risk of Money Laundering and Financing of Terrorism in Croatia, Government of Republic of Croatia (2018- (second evaluation), 2013-2014 (first evaluation). In 2017 she was a (co-) rapporteur for AIDP on the topic individual criminal responsibility of businessman for international crimes. In 2019, she was invited speaker at the Side Conference held during Assembly of States Parties to the International Criminal Court in The Hague on the special panel: The prosecution of economic and financial crimes: new mandate for the ICC or creation of a new international criminal court?

In 2011 she received the Annual Award for the best young scientist in social sciences by the Society of University Professors and other Scientists of the University of Zagreb. In 2015, she was selected for the USA International Visitor Leadership Program "Women Countering Violent Extremism."

She has published, besides Croatian, in English, Croatian and German, primarily in the areas that interlink the protection of human rights with (international) criminal law and in the area of transitional justice, business and human rights, primarily health and economic ones. She participated as a keynote and invited participant in many national, regional and international conferences and workshops and (co)orgnaized the same (e.g. World Congress in Medical Law (2010), Countering violent extremism (2015). The list of her publications is available online: http://bib.irb.hr/lista-radova?autor=301401. She is also active in blogs, the latest on COIVD-19 and international response: https://justice-360.com/virus-terrorism/

She is member of the Executive Board of Croatian Association for Criminal Law Sciences and Practice and is part of Editorial Board of Zagrebačka Pravna Revija. Besides, she is member of (inter)national criminal law and criminology associations: European Consortium for Political Research (ECPR), AIDP, Association of University Professors and Scientists in Zagreb and external member of the Academy of Legal Science in Croatia. Since 2020, she has been a member of the International Chamber of Commerce (ICC) Commission on Corporate Responsibility and Anti-corruption (Croatia).