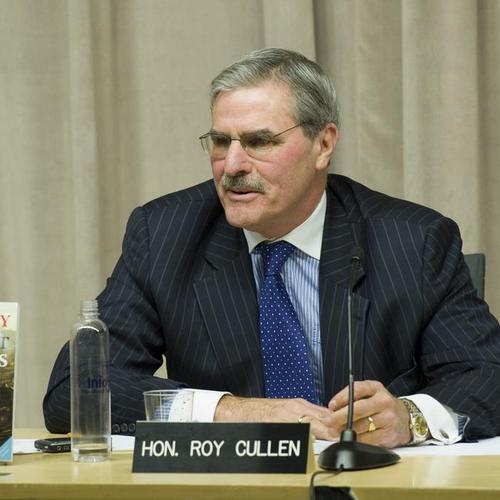 Born in Montreal, Canada, Roy Cullen earned his B.A. in Business Administration, and a Master of Public Administration. He qualified as a Canadian Chartered Accountant in 1972. Initially elected to the House of Commons in Ottawa in a by-election in 1996, he was re-elected in the 1997, 2000, 2004, and the 2006 general elections. He retired from the Canadian House of Commons in 2008. During his career prior to 1996, Mr. Cullen lived and worked in Bermuda and South Africa for six years, following which he served as an assistant deputy minister in the British Columbia Ministry of Forests, and as a vice-president in the Noranda Forest Group (now Norbord).

As a member of the Prime Minister Jean Chrétien’s government, and later under Prime Minister Paul Martin, Mr. Cullen served as chair of the House of Commons Standing Committee on Finance, as parliamentary secretary to the minister of finance, as parliamentary secretary to the deputy prime minister and the minister for public safety and emergency preparedness; and as chair of the Ontario Liberal caucus. In 2006 he was sworn-in as a member of the Queen’s Privy Council for Canada. He also served as Official Opposition critic for natural resources.

In March 2004, Mr. Cullen orchestrated the passage of a complex private members’ Bill C-212, An act respecting user fees, by engaging members of parliament and senators. The Bill was passed and resulted in significant changes to government user fees, making the system more transparent, performance-based, and accountable.

During his tenure as parliamentary secretary to the minister of finance, Mr. Cullen was actively involved in designing and implementing Canada’s anti-money-laundering regime. Mr. Cullen has been very active with the Global Organization of Parliamentarians Against Corruption (GOPAC) in the international fight against corruption and money laundering.

In 2008 Mr. Cullen completed a book The Poverty of Corrupt Nations in which he examines the relationship between corrupt leaders and poverty; and how, as a result of the misappropriation of public assets by elected and senior officials, millions of citizens around the world are being deprived of the basic human right of the chance to move out of the ranks of the poor. He offers a Twenty Point Plan as a way of attacking these vexing problems. In his second book, Beyond Question Period, or What really goes on in Ottawa, which was published in 2011, he chronicles the life of an MP In Ottawa beyond the rhetoric of the cut and thrust of Question Period.

Roy Cullen is an Honorary Governor, and Immediate Past Chair, of the Victoria Conservatory of Music; and he has served on the Board, and held other senior positions, with the Global Organization of Parliamentarians Against Corruption (GOPAC). He has also acted in senior volunteer positions with the United Way, the Salvation Army, and Rotary International.

Mr. Cullen lives in Victoria, B.C., Canada, with his wife, Ethne. They have one son, Peter